Looking around, you're bound to notice some astounding technical advancements that are creating new business prospects all across the world.

The mobile app market is the fastest growing section in the mobile industry, and it shows no indications of slowing down in the future. But why is that? This is due to the widespread usage of smartphones, which is propelling the mobile market to new heights. As a result, this idea seeks to develop an app for clients that is compatible with both iOS and Android.

There are several steps to take into account while creating and releasing the software on the market. When determining whether to design an app, the main concern is whether it will be available for iOS or Android. It is necessary to write the programming language in two distinct development environments to create mobile apps that work on both platforms.

It implies that development costs will rise and that businesses will need more resources than usual. React Native is useful in this situation.

It can take a lot of time and money to create a high-quality app for each of the major mobile platforms (Android and iOS), so cross-platform development is a smart way to increase your reach while also saving you time and money.

In this article, we’ll break down how much a React Native app costs, and highlight what affects the price.

What Is React Native?

What’s more, React Native app development cost is affordable so you can enjoy the benefits of a high-performance app with a low budget.

React native development company aims to facilitate writing code once and running across different mobile OS. This cross-platform app development framework makes things easy for developers to implement the same code for iOS and Android. The framework is open-source and community-driven and is encouraged by dedicated developers ready to share their knowledge, expertise, and input to improve and support the framework.

Why Choose React Native for Your App Development?

Some of the non-Facebook apps that were created using this platform include Pinterest, Skype, Discord, Walmart, and Bloomberg. The companies that created all of these applications undoubtedly have knowledge that we do not. What then might that be? Without going into React Native’s advantages and disadvantages. This section examines the different benefits of using React Native while creating apps.

The applications have a reputation for first-rate execution. One of its strongest advantages is the capacity to mimic the original experience, which maintains the app’s slick operation. In certain cases, this framework’s apps even outperform natively designed ones in terms of performance.

Here, we have a framework that is community-driven and open-source. Developers may so quickly and as needed access pertinent documentation. When working in a group, it’s simple to ask for assistance when a project isn’t going well. In addition to the official channels, several conferences and events are organized continuously.

The structure enables more adaptability among team members. Any developer may continue where another developer left off since the code is reusable. In addition to that, a team member may leverage another’s code to create an application for a different platform. It is possible for experts working on a project to develop smoothly because of the code’s reusability and flexibility.

What Are The Untold Benefits Of Using React Native For Mobile Application Development In 2022? 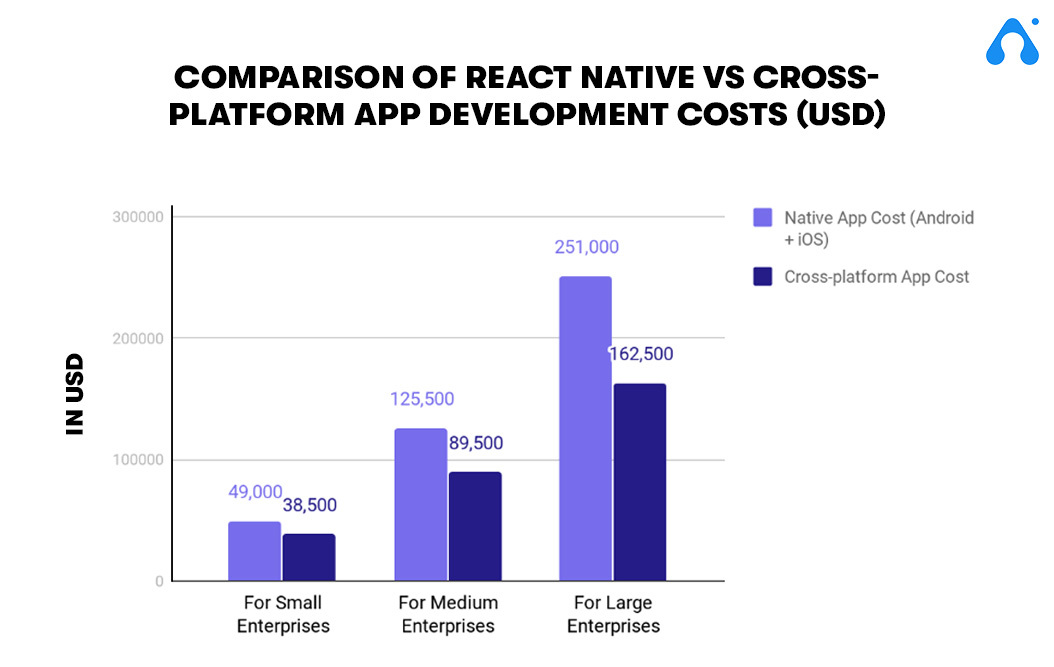 React Native not only helps to improve your efficiency but also boosts your development speed in different ways. With this platform, developers can combine high speed and efficiency to mobile applications. For example, it can integrate with third-party plugins to use the device’s functionality of other sensors.

With React Native, developers can build native components and allow them to reuse the same code for different platforms. In addition, the same code can be used for mobile or desktop users.

React Native apps perform like Native apps that were built on the specific Android or iOS app development platform. These apps are also fast as the programming language is optimized for mobile devices. Instead of using a CPU, this app takes advantage of the graphics processing unit (GPU) which makes it faster than cross-platform hybrid technologies.

React Native is compatible with both Android and iOS as 95% or more of the code is cross-platform. With this framework, developers only need to build one app and in the end, two apps will be created which saves time in app development. Furthermore, maintenance and updates are done on both apps at the same time which saves on future costs along with how much app development costs once the apps are built and launched.

React Native helps to improve team collaboration required to generate and receive updates thanks to its modular architecture. It can also gain from its instinctive & intuitive due to its ability of Swift app up-gradation. This module can also be reused while working with mobile and web APIs for web development.

How Much Does a React Native App Cost: What Affects the Price?

Undoubtedly, React Native development services are an efficient and reliable way to build a mobile app for both Android and iOS platforms. But did you know that you can save investment up to 50% with React Native mobile app development to reduce costs? This percentage also depends on how much source code you resume for both platforms based on its functionality.

Usually, if your app doesn’t have special features related to one platform whether Android or iOS, you can save 40% of the initial investment plans.

In essence, the complexity of your program rises with the number of features it has, and this complexity raises the cost of developing a React Native app, whilst low complexity does the opposite.

Consider fundamental features that don’t cost much or are the same across frameworks while developing your app, API integration, geolocation, and other extra features that might affect the development price. Please refer to our table to see how much it can change.

One must include design expenses while estimating the React Native app development cost. Design and prototyping are two crucial phases that, although adding to expenditures, also provide a developer with a clear direction. Saving money throughout these stages might thus result in increased expenditures during the development phases.

Developer fees are, of course, never set when predicting costs. You can see by looking at the React Native interview questions that they are always dependent on the developer’s abilities and degree of expertise. You should be prepared for highly high expenses if your project requires the contribution of several senior developers and engineers, such as financial applications, e-commerce apps, or apps that integrate several APIs.

Once the project is released and disseminated, development does not finish immediately. Instead, the majority of programs still need constant upkeep. You should take into account the amount of money needed for this ongoing maintenance in the project budget to truly grasp how much React Native costs. The cost of app maintenance includes future design adjustments, routine app upgrades, bug repairs, etc.

The maintenance procedure may be influenced by selecting the correct team; at ProCoders, for instance, we offer continuing assistance for the projects we complete. This guarantees that the apps receive regular quality and security updates. Even once the basic development process is complete, everything contributes to making it more responsive to user demands and expectations.

It is difficult to argue against the fact that this framework is strong and can assist you in creating fantastic mobile applications rapidly, with superior performance, and at a lesser cost than the competition. To ascertain whether it is appropriate for your project, it must first be properly assessed.

There are several reasons why designers think about using the framework while creating mobile applications. As already said, its cost-effectiveness is a significant factor. Therefore, React native is cost-effective, as indicated by the previous response to the question.

How Appventurez Can Help Build A Stunning And High-Performance Mobile App?

Appventurez is a leading mobile app development company that focuses on the client’s requirements with the right skills, experience, and knowledge. We have a dedicated team of experienced developers that has delivered high-performance and stunning apps built with React Native. In addition, we help businesses offer an excellent experience to their customers and meet their business goals. Also, you will enjoy these untold benefits and affordable React Native app development costs.

As you can see, React Native is a suitable open-source framework for building scalable apps and marketplace platforms. With this framework, you can deliver default app functionality and supply your development team with advanced technologies.

Apart from this, you can read more: What makes Appventurez a great Mobile App Development Team?

1- How much does React Native development cost compared to other platforms?

One of its selling features is that you can create apps for several platforms using the same codebase. Since it enables the same team to simultaneously build an app for iOS and Android, labor expenses may be reduced by almost half. React Native engineers may be hired for roughly $88,252, whereas Xamarin and Swift developers are respectively $117,783 and $102,850.

2- How can you outsource React Native App Development?

For any organization, outsourcing the job to an overseas site may be quite advantageous. This method’s major objective is to lower your project’s overall expenses by gaining access to less expensive resources. Ukraine is the country to seek if you need assistance developing your app from a React Native development business. Excellent React Native developers with a track record of providing clients with top-notch apps may be found in Ukraine.

3- What are the main benefits of React Native?

This framework for developing mobile apps has been around since 2015. Since its launch, it has gained popularity and is now one of the most widely used technologies for mobile app development. It is hard to deny that it is a powerful framework that can help you develop great mobile apps quickly, with high performance, and at a low cost. However, it needs to be carefully evaluated to determine whether it’s the right technology for your project.

Users demand more from their programs than from their food now that we live in the Internet era. Users want everything, especially the digital experi