How to Reduce React Native App Development Cost in 2023?

React Native is one of the top-most cost-platform development toolkits that can help reduce app development cost depending on customization and specifications.

As of August 2022, more than half of the global internet traffic came from mobile devices. If we look back at 2012, web traffic statistic was dominated by desktop users at 89.12 percent. This turnaround in the user base hints at the steep rise in the popularity of mobile apps. The range of services and the seamless user experience have been the primary driving factors. It has led businesses to push for mobile app development. Small enterprises and startups mostly opt for cross-platform app development owing to its layout being cost-effective. Frameworks like React Native offer cross-platform and hybrid app development options. If you are looking to launch an app to further scale your business, the following article outlines the React Native app development cost and is a must-read!

React Native is an open-source UI software framework developed and created by Meta Inc. and launched in 2015. It enables developers to create cross-platform applications with a native-like user interface. With React Native, apps can be customized and enriched with features without chipping away the UI. Additionally, a streamlined app may be easily created using React Native using a single codebase. Let’s take a look at the benefits of using React Native for app development: 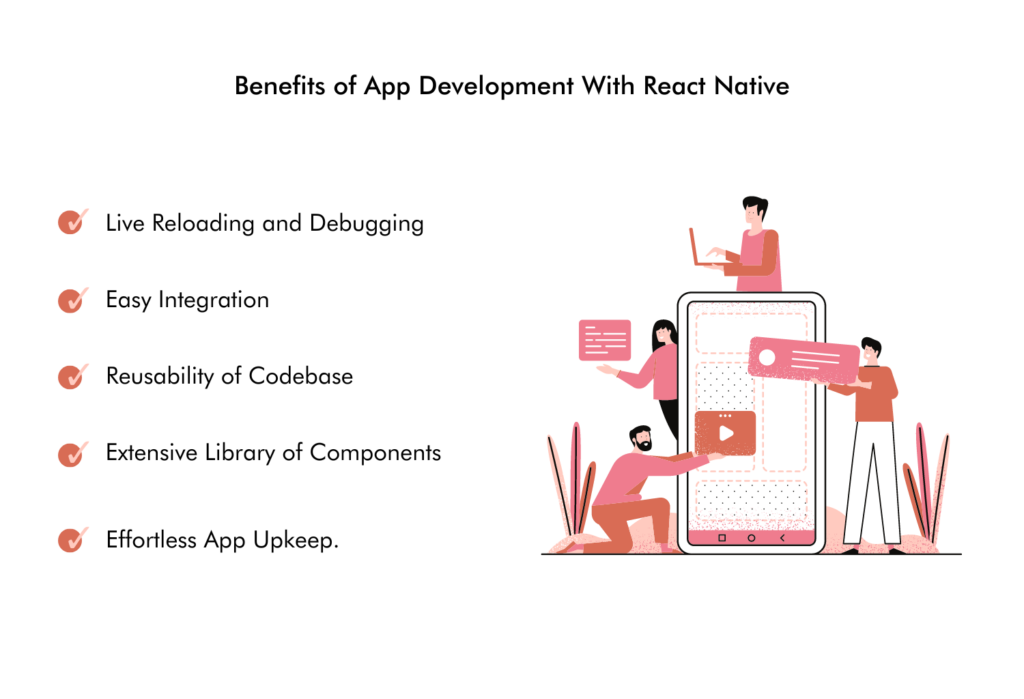 Both of these features, in turn, facilitate debugging alongside the app development process. Development and debugging, hand-in-hand, speed up the process and make it cost-effective. As the clientele can raise issues and incorporate changes during the development and not at the end.

Certain apps need to use the hardware features of the device to render a function. For instance, a food delivery app is necessitated by the integration of GPS and navigation. React Native provides developers with the ability to integrate these in-built device features such as Bluetooth, GPS, Wi-Fi, Mobile Data, etc., with ease. In turn, this roots out the possibility of laggy loads and higher memory usage.

React Native enables mobile app development for both Android and iOS, and web apps through a single codebase. There is no need to write separate codes for different OSs. A single codebase can be used and rehashed to implement the react native app frameworks. This not only saves capital but also the time in the app development process.

The React Native framework brings along in-built libraries of components. Developers can simply implement these components into their codebase. These include pre-coded UI elements, APIs, vector icons, maps, animations, and a lot more.

Some of the popular examples include Enzyme and Jest for bug-free coding, Lottie Wrapper for aesthetic animations, Expo to monitor the progress of the app, ESLint for identifying potential errors, Shoutem for UI components and themes, GiftedChat for chat UI solutions, etc.

Apps developed on the React Native framework act like native apps and deploy all the features of the device to the extent. Owing to this feature, there is no requirement to push regular updates on iOS and Android. Moreover, it also allows React Native apps to be easily maintained and opens up the option to further configurations. As a business owner, you do not need to spend extra money on the app’s upkeep and updates.

Why Have Large Businesses Built Their Apps with React Native?

Apart from the aforementioned properties of React Native, businesses, including SMEs, large enterprises, and startups prefer this frontend platform due to its cost-efficiency and need for less manpower. Despite the input being less, React Native renders exceptional performance. Let’s discuss the pointers in brief!

Unlike Native app development, the react native app development cost slashes down to one-fourth of the total. This is mostly facilitated by its cross-platform feature, live reloading, and reusable components. Developers and clientele can use the two-way communication channel to streamline cross-checking, reviewing, and debugging.

The timeframe to put the React Native app into production is short. This gives enterprise owners and entrepreneurs the opportunity to structure a revenue model and integrate it into the app, and/or place the app directly on the marketplace.

One of the most prominent reasons why React Native is chosen over other frameworks is the availability of community support. Experienced developers are always there to provide guidance and constructive feedback to beginners working on a project. Ergo, the development process provides a setting that is collaborative and helps techies grow.

A defined team of professionals is adequate to pull off a complex react native app development process. This team should consist of a project manager, a graphic designer, a few developers, and a quality assurance associate. The extensive library of components on UI and UX design further cuts the coding time and overall development process.

The overall expense of React Native app development depends on the technology stack being included, the array of extensions, customization, specifications on designs, and the time needed to deploy them. However, consideration of the below-mentioned factors to reduce React Native app development cost can provide you the window to manage your budget.

No requirement for additional resources

Variables like hiring experienced developers with technical expertise, upkeep of the codebase in a distinct and discrete manner, and deciding the ideal stage are necessary through the app development process. As a cross-platform toolkit, React Native ensures all these factors are in place.

In this case, one dedicated professional can look after the development of each element and stage of the application. There also is the option to constantly cross-check the development by participating in the community reviewing, and/or installing a linting tool from the React Native library. In doing so, you can save hefty amounts of money that would have instead been spent on hiring engineers with specializations.

Being a cross-platform framework, as previously mentioned, React Native enables developers to use and rehash a single codebase for both Android and iOS. Additionally, a single JavaScript code can also be reassembled to construct other various sections of the application, saving cost and time. A comparable code, for instance, may be used for a variety of applications. This assists developers who are utilizing the services to assemble the necessary codes.

The takeaway point is that the app development project is expedited when the code length is short. The shorter it takes to write the codes, the lower the price.

React Native expedites the implementation time by providing developers with the option of reassembling codes, pre-written codes for extensions and components, and easy configuration. This saves a lot of time that is instead used in bug-fixing and improvement. Once the project’s outline is laid down, it is usually swift to commence the development process.

The initial impression of an app is assessed through how intuitive and aesthetically pleasing its UI/UX is. Most of the clients opt for UI/UX design and development separately. This is neither financially viable nor time efficient. It is a hassle to make two separate sections focused on coding and designing to work in a union.

This is where React Native comes to the rescue. It not only offers UI/UX solutions through its library of components but also powers cross-stage similarity. Some of the popular components include UI Kitten 4.0 based on the Eva design system, React Native Paper, and Nachos UI kit.

Many big tech companies like Microsoft, Meta Inc., Bloomberg L.P., Tesla, etc., have built their primary applications on React Native. They have utilized a fully optimized codebase to meet their business ambitions. Some of the popular examples include the video-conferencing app Skype, photo-sharing platforms Pinterest and Instagram, data and media outlet Bloomberg, chat app Discord, the renowned fashion app Myntra, Tesla, Walmart, Uber Eats, and so on. Collaborate with Appventurez on your React Native App

At Appventurez, we have crafted various React Native mobile applications with unwavering commitment and eagerness. The team of React Native professionals at our organization has rendered products with a 100% satisfaction rate! Some notable apps built by them include –

In all these apps, the team of React Native developers at Appventurez took note of the clientele’s project specifications and drew a sketch of what the end product would look like. Upon verification by the clientele, options regarding the technology stack were finalized. The app’s interface was also constantly in check by our UI/UX design team. Through a consistent testing-reviewing channel, our team delivered the end product on time and has been since monitoring its growth.

1. How much does it cost to create a React Native app?

According to market analysis and considering the cost-influencing factors, the average cost to develop a React Native app could range between $10,000 to more than $300,000. However, outsourcing your project to remote locations could lower the price range and serve your budget.

React Native comes in-built with various tools that reduce the overall app development cost. Features of the framework facilitate a quicker development process, provide pre-developed components through its extensive library, allows reviewing and debugging through live reload, permit reusability of the codebase, etc. This shortens the coding time making it hassle-free for developers to work on the project and in turn reducing the cost.

3. How much does it cost to hire a React Native developer?

Depending on requirements and the deadline, you can either hire freelancers or outsource your React Native app to a company. Freelancers can charge somewhere between $5 and $93 per hour depending on their location. However, it comes with its demerits. On the other hand, you can opt for outsourcing or outstaffing your project to lower the overall development cost.

Users demand more from their programs than from their food now that we live in the Internet era. Users want everything, especially the digital experi