How Does Robotic Process Automation Impact The Insurance Industry?

Enterprise applications built on Node.js benefit from the vast array of features it provides. From scalability to optimization and faster loads, Node.js has helped boost businesses.

For an enterprise application to feature all core business processes and work seamlessly, it is imperative to build it in the best development environment. The cross-platform, run-time environment, Node.js offers a perfect fit for this demand. Known for simplifying the development process of fast and high-quality applications, Node.js also provides a unified, real-time channel for both the server and the client.

In enterprise app development, Node.js crucially allows and maintains several simultaneous requests on the server without strain. It also provides efficiency as it builds on an event-driven I/O model, and scalability as it is compatible with various OS.

Owing to the features mentioned above, Node.js has been climbing up the popularity chain amongst developers and enterprises. For instance, Node.js for app development is used for 85% of total development time! A deeper dive into the architecture of Node.js and how it upscales enterprise applications is essential.

Node.js is a development environment that allows programmers to build web APIs and network servers using JavaScript. Initially, JavaScript was used primarily to load interactive elements of a web page in the browser. The usage then evolved to generating codes on servers. This gave developers the leeway to deploy web pages as desired. However, these features were accessible through specific applications depending on the OS. For instance, Windows was required for WSH, Ubuntu for Gnome, along with a JS web server to run the scripts. This setup was time-consuming and a hassle for the developers.

The conventionality of systems requiring specific programs to run several scripts was revolutionized with the arrival of Node.js. It enabled developers to structure applications unrestrained by platform specificity. Indicating that, provided Node.js is installed, web apps and servers could be built and run on any operating system whether Linux, Windows, or macOS.

Not to mention, Node.js is open-source and functions on an event-driven I/O model. This allows faster builds for server applications and the handling of concurrent requests through the communication channel between both the server and the client.

A perfect tool for enterprise applications, Node.js features offer scalability, high performance, and a cross-functional development platform. It must be noted that applications for enterprises are loaded with several business components. Issues of lagging and slower loads will lead to counterproductive outcomes. Node.js offers the solution by addressing the necessity for a swift, lag-less user experience on the application.

Enterprise applications that run on Node.js work seamlessly. Over the years, such traction has been observed that according to the 2018 Node.js User Survey Report, more than half of a typical developer’s time is spent working on it. The following is a brief reflection on the vast array of features and benefits of Node.js for enterprise applications. 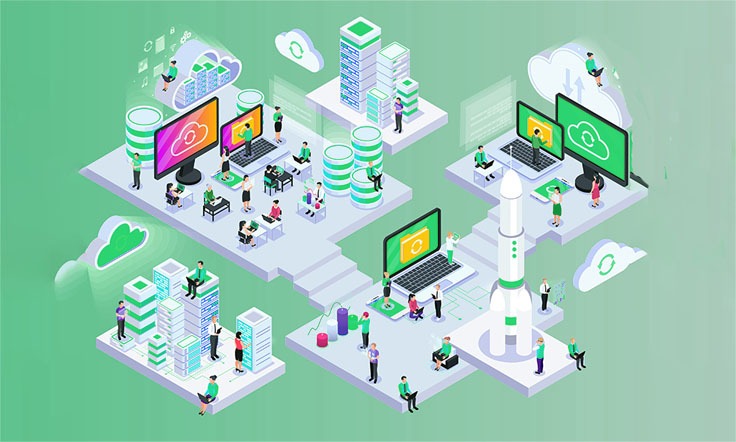 Enterprise applications must be efficiently integrated features to deal with vital business operations like accounting, finance, human resources, etc. As the enterprise grows, the application is required to be scaled up proportionally to incorporate newer processes.

Node.js is built over the Chrome V8 runtime environment. Developers can use Node.js, as previously explained, on any operating system. It is written in C++ language and provides various optimization options.

The caching ability of Node.js makes web pages load faster. This is because once any request is made, the modules are automatically cached to application memory. Saving time and exempting it to load the codes every time.

Node.js provides a single-threaded channel to handle simultaneous requests from both ends, i.e., the client and the server. One of the major challenges to building enterprise applications is handling large numbers of persistent requests. Node.js can regulate multiple requests with ease.

What is Node.js used for?

The built structure of Node.js is lightweight and capable of retaining multiple connections on a smaller memory footprint. This signifies that Node.js can be used for several different development projects alongside web applications.

Given its various applications, developers have written many frameworks with exceptional capabilities to address specific processes. Popular frameworks like Meteor.js, Express.js, and Socket.io are regularly used. All these frameworks, however, are categorized into three primary types:

An MVC framework can be worked upon to split application logic into three parts, namely, models, views, and controllers. This separation of development concerns enables facile scalability and app maintenance. A popular example of an MVC framework includes Express.js.

Full-Stack MVC frameworks are capable of handling both the frontend and backend development of applications. There are also many options that include libraries, template engines, scaffolding, etc.

One of the types of API in Node.js, the Representational State Transfer or REST API framework facilitates faster app builds on Node.js. This negates the need to look after the architectural components of network applications. It’s also owing to this framework that building enterprise applications on Node.js becomes a go-to choice. 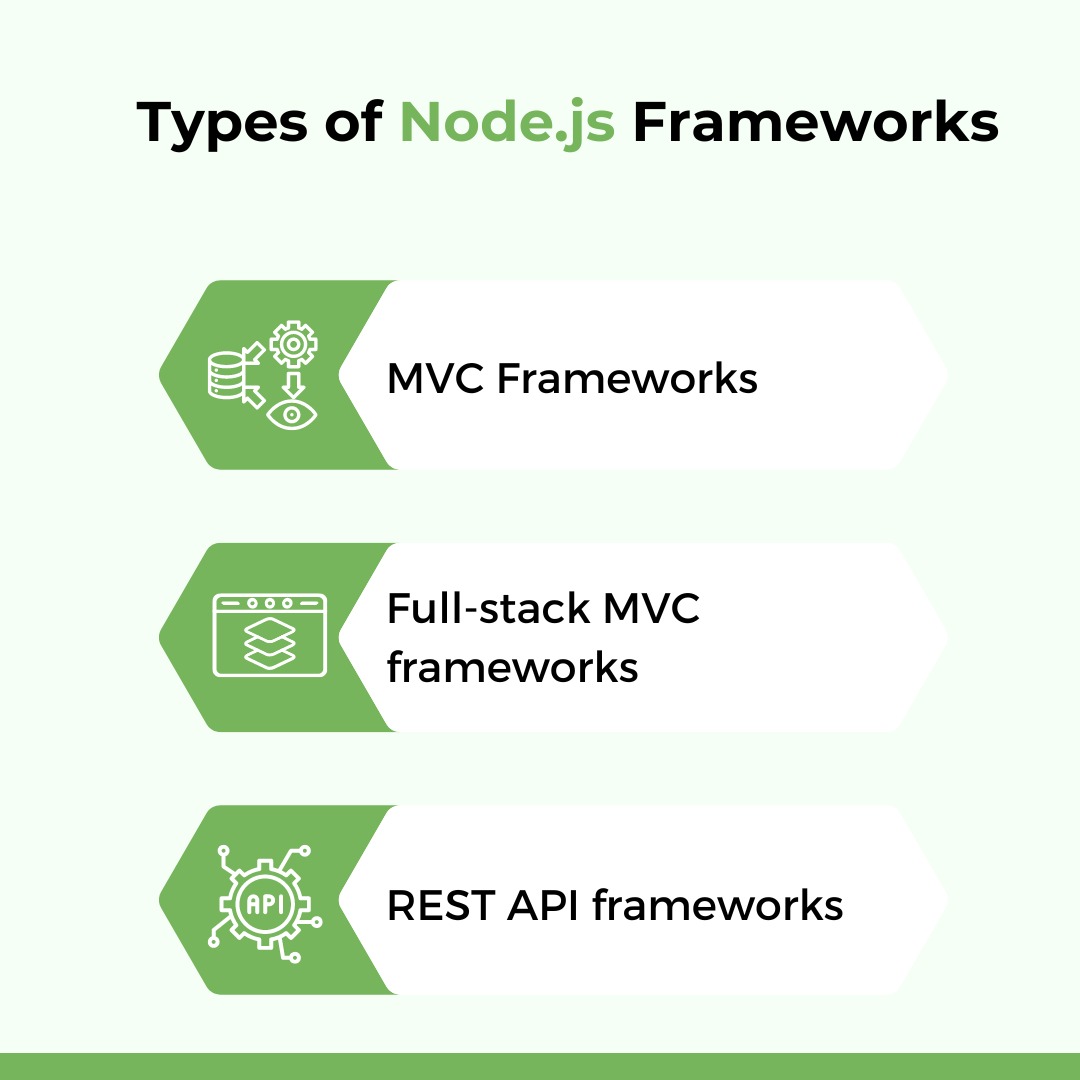 While the list of Node.js frameworks is endless, the top 3 frameworks as preferred by developers and programmers depending on usage, libraries, etc., are as follows:

Express.js is one of the best Node.js frameworks. A section of developers has crowned it the best owing to its minimalistic and straightforward representation of the Node.js environment. Anyone with a basic understanding of Node.js, equipped with certain programming skills can use Expree.js to the utmost advantage.

Koa.js is the prevalent tool used to structure web services, i.e., APIs. Using this, a web page hosted on a given URL can be transformed to feature interactive elements. It is built along the contours of Express.js but aims to be smaller and render more qualities.

Socket.io is inherently a JavaScript library that facilitates the building of real-time applications. It further establishes two-way communication between clients and servers. It is extensively used in building chatbots for enterprise applications.

Apart from the above, other popular frameworks include Meteor.js and Hapi.js. These are primarily used for building API servers, HTTP proxy applications, and refining Node.js for mobile app development.

Partner with Appventurez for your Node.js project

At Appventurez, various web and mobile applications are being built day in and day out. Node.js is an integral part of Appventurez’s development program and there is a dedicated team of professionals handling this section. Some notable apps built by them include:

a) Gribb utilizes accumulated data subsets in the form of driving behavior and vehicle technology amongst others to reshape the driving culture along the lines of safety and sustainability. Built on Node.js, it is available for download both on Android and iOS devices.

b) Hello Mobility, similarly, uses fleet data to enhance the driving experience. It further monitors the trips, notifies the driver when there is a traffic violation, etc. Built with Node.js in the backend, the app is available both on the Playstore and the Appstore.

Node.js enterprise app development team at Appventurez will develop a strategy while taking note of your enterprise’s needs and objectives, and list various options to ensure scalability and efficiency. To leverage Node.js features and build a seamless enterprise application, reach out today!

1. Why is Node.js preferred for enterprise application development?

Node.js is the prevalent choice for web server and backend development. In addition, it has also been the favorite for automation, scripting, data streaming, API development, microservices, and frontend. As per a survey, 60% of the total development time is spent using Node.js! This data implies the ever-broadening usage capacity of Node.js in the sphere of computer programming.

3. What Node.js frameworks are most commonly used?

There are a lot of frameworks built over Node.js to address specific tasks and objectives. However, the popular ones include Express.js, Koa.js, Socket.io, Meteor.js, Hapi.js, and so on.

What Is The Difference Between APIs And Microservices?

You've probably heard the phrases "APIs" and "microservices" used when talking about software architecture and interconnections. Both ideas are ess