How Much Does Flutter Application Development Cost?

What Is Edge AI & How Does It Work?

What Is The Metaverse & What Can It Do For Your Business?

What Is Multichain In Blockchain?

How Much Does Flutter Application Development Cost?

First Xamarin, PhoneGap, React Native and now Flutter. The last one is the most recent addition to the list of mobile app development frameworks.

And quick popularity of Flutter is no surprise as top companies like Google Ads, App Tree, Birch Finance and others have wholeheartedly accepted and adopted it.

Announced by Google in February 2018 at Mobile World Congress makes the framework take its share of the limelight a bit lately but stronger. The framework is helping mobile app developers to let them build high-performing applications by writing a single code base.

Being a cross-platform framework, it has solved one of the many challenges of mobile app development companies while providing impactful user experience along with offering an autonomy to write only a single code base.

Flutter being a newbie in the mobile app development industry made its foundation strong and this is the reason, businesses are looking forward to developing their app based on it.

Being so impactful that top known brands are using flutter, shows the most advantageous part of it while hiding the question of its costing part.

Before directly starting with the flutter application development cost, let us quickly delve into the realm of Flutter to get a more clear picture of it.

A Brief Introduction About Flutter

The entire UI of its is made by combining different widgets each of which defines their structural element, stylistic elements, aspect of layout and many more. This has become an important part for the developers and they are working on apps built with flutter.

Talking about its popularity, the framework is progressing and has made it to the top 100 software rapport based on GitHub stars by the time release of preview 1 was announced on June 2018. Since then it has risen in ranks and now comes under the top 50.

Attending to this, let us restore its timeline and history.

A Quick Look At The History Of Flutter

(b)- introduction of Web Preview Version

The continuous update and frequent release are proving how Flutter is evolving and securing its place among mobile app developers by being the most considered platform for developing Android and iOS apps.

By looking at its brief and how it is evolving, it is the time to check out what makes it different from other frameworks available in the market and how it reduces flutter application development cost.

With the support ready, let us have a look at the benefits of Flutter Mobile App Development

One of the most amazing things about Flutter is it’s hot reload. With the help of it, mobile app developers can check the changes they have made to the code within seconds. The ease of checking changes made it easy for the developers to quickly add new features, fixing the bugs and experimenting.

Apart from all this, a hot reload is a way that collaborates with developers and designers to improve the look of the app.

If you are in a hurry and want to show your product to the investors to the soonest time possible, there is no better option then Flutter. Developers can build an application that looks native on both iOS and Android. Thus, investors can get a clear picture of what will the MVP looks like.

Widgets are part of the application and not of the platform, thus with Flutter, there will be no compatibility issue on different OS versions. The practice in return will require less time for testing.

When it comes to Facebook’s React Native and Google’s Flutter, Flutter is the one that is winning the race due to Dart. apart from that, there is no need for JavaScript to connect in order to start any communication with the device’s native components. Thus, apps made with flutter increase both the efficiency and performance of the development phase.

When using Flutter, mobile app developers don’t need to compile code for every change they made to the app as all the changes are made saved hand to hand. The overall automation increases the performance of the developers.

Widgets are necessary for the app’s view and interface. They should provide a natural look and feel, irrespective of the screen size. And thankfully, Flutter carries a widget approach as it has a set of widgets along with the capability for creating complex customs widgets.

A widget can certainly define-

Platform-specific functions like geolocation, the camera required access to native features. These platform-specific functions required the means of native languages and Flutter is the platform that justifies the feeling of developing on the native platform. It also allows developers to reuse existing Java, Swift and Objective-C code in order to access the native features and SDKs on both Android and iOS.

Flutter is Google’s initiative, thus it got back from the most powerful tech giant. Flutter gets the support from the Material Design team as well as from the community of over 1000 developers who all are willing to contribute to the growth of the given framework.

With the support ready, let’s checkout-

How much does Flutter App Development Costs

Developing an app cost sometimes less and sometimes more than thought. Similarly, flutter application development cost depends upon a few factors. Those are-

Complexity in the application

Applications are basically divided into categories starting from low-medium-high complexity. The more complex features and functionality an app will be having, the more one needs to pay. Also, the time for developing the application will be more than as compared to the apps with fewer features or less complex functionality.

Just like the complexity, finding apps different from one another in terms of features and functionality is quite common.

Hence, developing the app as per the features will ask for more cost. For example- developing a messaging app is still less costly as compared to the one filled with AI, VR or AR.

Design of the application

The more easy and expressive the app design will be, the number of users will not be able to resist themselves to use the app too frequently. Achieving the same does not come without spending the cost.

No matter how amazing results your app is showing, not updating it on time will make it lag behind and slowly users will abandon it or stop using it. And this is what the most important post-app development process looks like.

Place of the Agency

It is quite obvious, the cost of flutter app development might be costly in the USA but not in some other countries. This is the reason, many of the businessmen opt for the smoother passage by outsourcing their overall app development process.

Place of the Agency 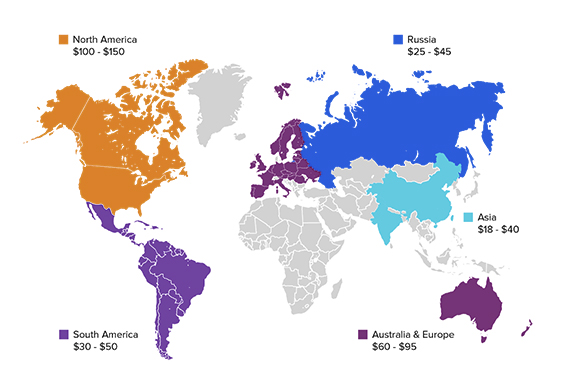 Flutter app development cost that will cost you differently as per different regions.

So, these are the factors that are required to answer how much does it cost to develop a flutter based mobile application.

How do we estimate the flutter application development cost?

Here at Appventurez, we believe in measuring the flutter application development cost by calculating the number of hours and multiply it with billable hours.

Also, the cost of flutter app maintenance cannot be tagged as an additional thing but it certainly does cost some additional amount. Maintaining an application is like feeding the app with all the necessary updates, upgradation, new features, etc.

Not offering the same to the people around can defame the overall status and success of the app while making it lag behind as compared to other competing apps. Flutter mobile app development cost estimate depends on the efforts and time that developers invest in any project.

Want us to work on your project?

Co-Founder and VP Mobile Architect of Appventurez. A software professional who is highly experienced in Android, Flutter, React Native. He is a passionate developer with excellent programming skill who believes in bridging the technology gap and making the life of a large number of people much easier through his wide knowledge and experience.

One Reply to “How Much Does Flutter Application Development Cost?”

Hey there! This is Sitaram, author of this blog. Leave your email address and we'll keep you posted on what we're up to.

This will subscribe you to Appventurez once-a-month newsletter. You can unsubscribe anytime. And we promise not to pester you or share your data :)

Hey there, wondering where this article came from? It was produced by some people at Appventurez, a Mobile & Web App Development Company. We are here for solutioning of your technological needs.

What Is Edge AI & How Does It Work?

Recent advances in AI efficacy, IoT device proliferation, and the capability of...

What Is The Metaverse & What Can It Do For Your Business?

Imagine a virtual environment where individuals can socialize, work, and buy fr...

What Is Multichain In Blockchain?

MultiChain is a fork of Bitcoin that is open source. It is simple to configure ...

Across 124 territories and 33.6k global workspace